The Endgame of Capitalism 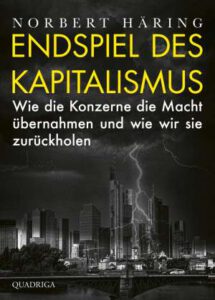 Part 1: Power to the corporations

A pandemic exposes the prerogatives of capital

Applause instead of money for the systemically important

Luxury booms in the crisis

The power of corporate lobbies

Elite control made in USA

Beauty contest before a jury of investors

An exclusive club of powerful corporations

The Institution for Public-Private Partnership

The Digital-Divide-narrative as an example

Choosing and grooming the next elite generation

The sellout of the UN

He who sets the standards has the power

The signature of Silicon Valley

Part 2: The nature of modern capitalism

The capital of Robinson Crusoe

The sources of profit

Capitalism according to Peter Thiel: Competition is for losers

Monopolies thanks to intellectual property

Excursion: A look back at early capitalism

The influence of land rents

Capital is a measure of market power

Capital is a constraint on production

Where does the money come from?

Why doesn’t everyone start a bank?

Where does the money go?

Money creation and interest as pillars of capital’s power

Money is the right to use society’s resources

Central banks in the service of capital

The role of the financial sector

Invented values as fuel for enrichment

The “cost of capital”: profits redefined as costs

Making everybody play by the rules of capital

Tax evasion services for the rich and powerful

Democracy in in tune with the market

Part 3: The endgame of capitalism

A crisis with a long history

Run for your lives

From capitalism to neo-feudalism

Sunshine on Credit in the Brave New World

Excursion: The geopolitics of the endgame

ID2020: A number for every global citizen

The abolition of cash

Smart City: People on a leash

LifeLog: A logfile of our lives

The Great Reset of the World Economic Forum

The crash as an opportunity

Society as a symbiosis

The company as a social institution

The cooperative with tied capital

Monetary system and central bank in the service of the population

Public knowledge for the benefit of all

Disarmament for peace and the environment

Political power to the people as a basic requirement

Emancipation from the shadow powers

Compatibility with EU and monetary union

What we can do individually

Information in English on my latest book (Endgame of Capitalism)

Dear Readers, I have started the telegram channel “norberthaering.de/en”. I will use it to broadcast the titles of new blogposts on “Money and more” and a link to them. If you use telegram and would like to receive these notifications, please click on https://t.me/norberthaeringenglish. Alternative ways to stay informed about new content are here.