New book coming out in October

The Endgame of Capitalism

“Economists and the Powerful: Convenient Theories, Distorted Facts, Ample Rewards” (with NIall Douglas) 2012. This book puts power in various guises back into economic theory, from which economic textbooks have largely purged it over time. Power in finance, power in the labour market and market power are a few examples. This purging was, as we show, done to serve the interests of the powerful, who prefer to have their power be invisible, lest people would rebel against it. Anthem. 260 pages. $29,95. 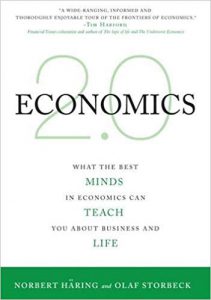 Economics 2.0: What the Best Minds in Economics Can Teach You About Business and Life.” (with Olaf Storbeck) 2008. The original German version of this book (Ökonomie 2.0) won the prize for the German economics book of the year by getAbstract. It was translated into English, Japanese, Chinese, Korean and italian. The book is in the Freakonomics-tradition, presenting often surprising results of experimental and statistical (econometric) research done by economists in all walks of life. It was written at a time when I had still more faith in economic research and was not yet quite as suspicious of economists’ scientific imperialism. Still, it is well worth a read with this caveat. Macmillan. 256 pages. $7,99.

For a annotated, complete list of Norbert Häring’s books see German section of this blog under Blog / Autor.


Information in English on my latest book (Endgame of Capitalism)

Dear Readers, I have started the telegram channel “norberthaering.de/en”. I will use it to broadcast the titles of new blogposts on “Money and more” and a link to them. If you use telegram and would like to receive these notifications, please click on https://t.me/norberthaeringenglish. Alternative ways to stay informed about new content are here.